THE second of five annual rounds of the Mass Drug Administration (MDA) to eliminate Lymphatic Filariasis (LF)- commonly known as ‘Filaria’- was launched on Friday at the Square of the Revolution.

In 2017, the MDA was restarted after failing to achieve at least 65 percent coverage a few times before. At the end of the first annual round of the MDA, a whopping 86 percent coverage was recorded for Guyana.

Citing sources that indicate the success of the MDA across the world, Dr. Moses affirmed: “It is important and it is possible to eliminate this disease, so that [it] is no longer a public health problem.” 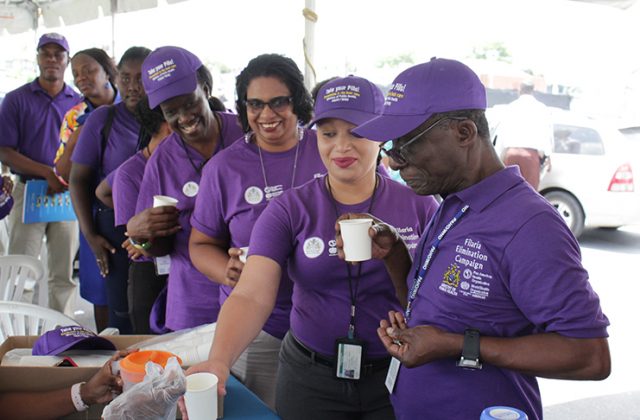 Pan-American Health Organisation (PAHO) Country Representative, Dr. William Adu-Krow, leads the way by taking his pills to safeguard against Lymphatic Filariasis at the launch of the programme at the Square of the Revolution [Vishani Ragobeer photo]

Furthermore, she posited, “As a country we must feel encouraged to ensure that these studies are replicated in our own country.”

Guyana, unfortunately, is the only country in the Americas yet to scale up the MDA to 100% geographical coverage. The campaign was restarted last year, but in Regions Three, Four, Five and 10, as these were regions considered endemic in the 2001 survey done to assess the prevalence of Lymphatic Filariasis.

The MDA had previously failed to meet its mark, because of lapses in the youth demographic, among other factors. The Ministry of Education (MoE) was however recruited last year, so that pills could be distributed in schools.

While this has contributed to the overall success of the campaign, Health Promotion Coordinator of the MoE, Dionne Browne, told the gathering of medical personnel and pill distributors that the ministry is “fully onboard” the programme.

Dr. Moses shared that as the second round unfolds, the MoPH has upped its game even more in the fight against filaria. Moving towards eliminating the disease as a public health problem, three new interventions will be tapped, according to Moses. The first will be to conduct a remapping survey in the six regions where the MDA is not being conducted presently, as a follow-up to the 2001 survey.Dr. Moses had previously explained to the Guyana Chronicle that through this remapping exercise, trained and qualified health personnel would go into areas within the regions and collect random blood samples from children aged 6-14– once permission has been granted– to determine the prevalence of LF. Should there be more than a two per cent prevalence in the areas within the regions, the MDA will be conducted there.

The second intervention is to explore introducing another pill, Ivermectin, to the MDA regimen. She explained that numerous studies show that using Ivermectin alongside the Diethylcarbamazine Citrate (DEC) and Albendazole (ALB) currently being disseminated, could reduce the number of years needed for the MDA.

And finally, lymphatic drainage to reduce edema– the abnormal accumulation of fluid in certain tissues within the body– is another intervention which seeks to make the external manifestations of filaria less noticeable and more manageable.

Adding to Dr. Moses’ sentiments was Pan-American Health Organisation (PAHO) Country Representative, Dr. William Adu-Krow, who said, “The disease can go hidden for many years and that is the important thing.”

In fact, once infected, it could take up to 20 years for the external manifestations of LF to appear- i.e., the chronic and irreversible conditions of: lymphoedema (tissue swelling), elephantiasis (skin/tissue thickening) of the limbs and hydrocele (scrotal swelling). 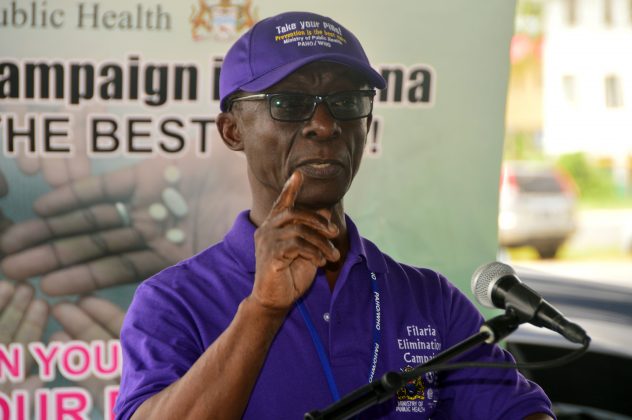 He also shared that the disease causes a disability, which in turn causes a loss of productivity. This, coupled with the stigma attached to the external manifestations can make someone’s life very difficult, according to him.

“[Can] You imagine someone who has to drag his or her foot to go to the clinic? They don’t wanna go,” he said and stressed that this is just one reason why the pills must be taken to prevent the development of the disease.

He noted also that Guyana is one of the four countries in the Americas (in addition to Haiti, The Dominican Republic and Brazil) left to eliminate the disease and questioned, “Other countries have done it. What makes us different?”Adu-Krow also highlighted that about US$1M is expended each year on the MDA and that money is only spent because “We have to chase [filaria] away.”

“WHO and Guyana’s undertaking to eliminate Lymphatic Filariasis is a costly one requiring intensive fiscal and technical resources, but the social and economic benefits to be had in the elimination of LF would far outweigh the costs,” he stated. Dr. Jones also affirmed that the fight against disease, which causes disability and loss of economic activity, is also a fight against poverty.

“The evidence is there that the elimination of Lymphatic Filariasis in Guyana is not an elusive dream, but a real possibility,” Jones highlighted and posited, “Someday, an event like this [launch] will be held to declare that LF is no longer a public health problem but has been arrested, convicted and sentenced to banishment.” 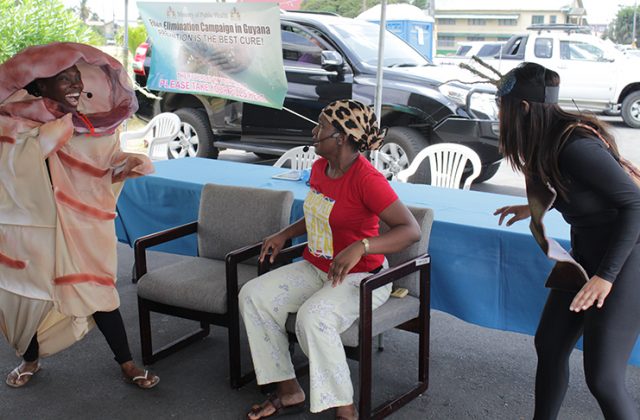 For the MDA to be successful, generally, 65 per cent of the total at-risk population must be administered the pills. The DEC and ALB must be taken once every year for five consecutive years for them to be effective in eliminating the disease. Three DEC pills are given, along with one ALB pill; these are responsible for eradicating the bacteria.

Lymphatic Filariasis (LF) or ‘Filaria’, as it is more commonly called, affects the body’s lymphatic system, which functions to remove unwanted fluids from the body and transports ‘lymph’- a fluid which contains white blood cells that help to fight infections.

The World Health Organisation (WHO) states that this disease is caused by infection with parasitic worms called nematodes, classified as ‘filarial worms’. In Guyana, filariasis is caused by the wuchereria bancrofti worm and is transmitted from human to human by the culex mosquito.