Ambassador Robert Kopecký, Head of the European Union Delegation in Guyana, and Ms. Margaret Lawrence, Executive Director of Merundoi Inc., signed a grant contract to implement a two year (2 yr) project entitled “Modelling and Reinforcement to Combat Domestic Violence”.
The grant comes to a total of EURO 137, 222 and is funded from the European Instrument for Democracy and Human Rights (EIDHR) 2012-2013 country allocation for Guyana.

Ambassador Kopecký stated; “not only does the EU advocate for better protection for victims of domestic violence, the EU also advocates for the eradication of domestic violence in all forms. The rights of vulnerable persons, especially those subjected to the scourge of domestic violence, are particularly important and the Merundoi project seemed particularly appropriate in this regard. We look forward to an effective implementation of the project as it complements the existing work on the ground initiated by the Government of Guyana and other civil society partners.

Ambassador Kopecký further added that; ‘on 6 June 2013, the EU adopted the European Protection Order [EPO] which will help to protect victims of crime and victims of violence, wherever they go in Europe: the protection will travel with the citizen.” The Ambassador opined that the EPO could be looked at for best practices in combatting domestic violence locally.

Ms. Lawrence stated: ‘Research shows that Domestic Violence crosses racial and socioeconomic lines with 31 women killed in 2012, 24 in 2013 and 4 in January 2014. The project will; sensitise men and young boys to the effects of Gender Based Violence (GBV), encouraging them to adopt new behaviours; empower women and girls to identify all abuse and protect themselves; facilitate general dialogue leading to behaviour change. Work under EU funding will be done in the ten administrative regions with in and out of school females and males; current and former prisoners; men; parents. The general public will be therefore given a voice in preventing violence against women.

The overall objectives of the Merundoi Inc project are to sensitise men and young boys about the effects of GBV, and encourage them to adopt new attitudes, behaviours and practices that will improve their lives, to educate young people about GBV as a preventive approach with education rooted in gender- and rights-based approaches, and to empower women to identify all forms of abuse and to take action to protect themselves. The aforementioned activities will all be implemented primarily via the utilisation of entertainment and education (edutainment) to raise general awareness leading to raising questions and fostering dialogue that will lead to attitude and behaviour changes.

The European Instrument for Democracy and Human Rights (EIDHR) is a self-standing financing instrument that provides assistance for the promotion of democracy and human rights worldwide, and in Guyana specifically aims at assisting civil society to become an effective force for political reform and the defence of human rights. Since 2010, the EU Delegation in Guyana has launched regular calls for proposals under this thematic line and to date has provided grant financial assistance to a total of 22 beneficiaries, totalling approximately EURO 1.4M (GYD399M).

It is envisaged that the grant to Merundoi Inc will supplement the work already undertaken by other grant beneficiaries locally, and the organisation will be working over the next twenty four months towards the effective roll-out of the activities foreseen under the intervention.

Merundoi which is an Amerindian word from the Akawaio tribe means strength, stamina, courage and hope. It is a local Non-Governmental Organisation established in 2007 and its mandate is to work with its partners towards a Guyanese society where every child has the right to grow up in a safe and secure family and community. 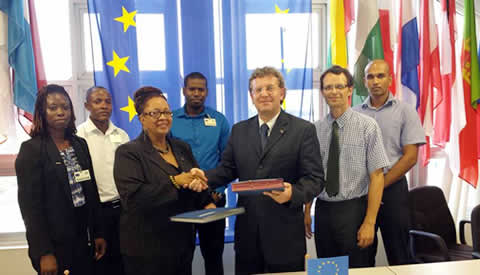